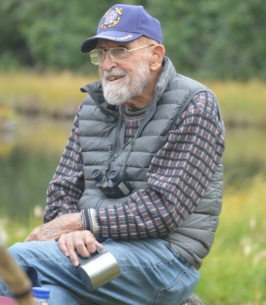 Robert Arthur Moss, age 95, passed away on July 24, 2022, at his residence in Anacortes, WA. He previously resided in Sequim and Pt. Ludlow. It was a gentle passing, surrounded by people who care, the natural end to a life well lived.

“Bob,” as he was known to most, was born in Oakland, CA in 1926 to Horace White Moss and Irene (Munn) Moss. He grew up in Alameda, CA, where he attended public schools. His stepmother, Leone Moss, came into his life at a young age and had a profound, positive, and life-long influence on him.

Bob enlisted as a seaman in the United States Coast Guard in 1944 and served in the South Pacific at the end of World War II. He then attended the United States Coast Guard Academy at New London, CN, graduating in 1951 with an ensign’s commission. He subsequently earned a degree in Civil Engineering from Rensselaer Polytechnic Institute and was a registered professional engineer in three states. During his 31 distinguished years in the Coast Guard, ultimately achieving the rank of Captain, he sailed in the bark “Eagle,” and nine other Coast Guard ships including as commanding officer of a cutter in Viet Nam, during which he earned a Bronze Star (he always insisted it was the ship and its crew that earned it, not him). He also commanded an icebreaker that served in both the Arctic and Antarctic. Captain Moss’s other decorations include the Coast Guard Commendation Medal, two Coast Guard Unit Commendation Medals, a Navy Unity Commendation Medal, the Antarctic Service Medal and various World War II and Vietnam service medals. He served at “shore duty” stations in New Orleans, LA, Governor’s Island, NY, San Francisco, CA and Seattle, WA.

Upon retiring from the Coast Guard in 1975, Bob earned an American Merchant Mariners Unlimited Ocean Master’s License and became a Puget Sound ship pilot. In the subsequent eleven years he piloted over 2,100 ships in and out of the waters of the Salish Sea (western Washington).

Bob’s life nearly ended in 1952 when he suffered a ruptured appendix while at sea and rough weather delayed his getting medical attention for a full five days. Instead, his emergency appendectomy in Corpus Christi was the introduction to the love of his life, Liz (Elizabeth Wolchick), a US Navy nurse. Their 63 years of marriage was a source of joy and gratitude to Bob, and throughout their time together on more than a few occasions other couples turned to them for marriage advice. Bob was a devoted father to his three daughters and was a father-image to a number of others; he greatly enjoyed being a grandfather and on his 94th birthday became a great-grandfather—the only “great-grand” in the entire Moss family.

And anyone who has seen the back of Bob’s self-styled calling card knows that he enjoyed—and actually excelled in—sailing, camping, travelling, duck hunting, writing, painting, and playing the bagpipes with one of several bands to which he belonged. His signature walking sticks—hand-whittled on self-harvested sticks he got on his excursions in the woods, personalized with symbols and quotes for its intended recipient—are treasures to those lucky to have been gifted one. He will be remembered especially for his generosity, dedication, dependability, sense of humor, and deep love of family.

Bob is reunited with is “bride,” who passed in 2015 as well as his parents and his sister, Carol Rodgers. Those left behind to appreciate his remarkable life and carry on his legacy include his three daughters, Susan Blenk of Sequim, WA, Nan Maysen of Anacortes, WA and Ley (Karl) Schleich of Anchorage, AK; his “neph-son” Rob (Susan) Rodgers of Ogden, UT and niece Sally Christine Rodgers-Repass of Watsonville, CA; grandchildren Andrea May, Jenny Bingham-Blenk, Carlyn Harris, Rob Blenk, Valerie Schleich, and Cori Schleich; and a rich array of friends.

As per Bob’s request, he will be cremated, and his ashes dispersed at locations of his family’s choosing and a "party" hosted on his behalf will be arranged at some point in the future. In lieu of flowers, those inclined may consider donating to The Foundation for Coast Guard History www.fcgh.org or the California Waterfowl Association www.calwaterfowl.org .