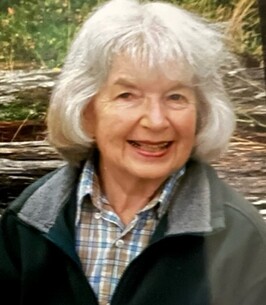 Surrounded by her beloved family, Nancy died at her Coupeville home of 24 years on Sunday, May 1st. She was born in Portland, Oregon, of Donna Clare (Clancy) Mason and Arthur Mason. The markers of her life were her faith, her family, and her friends. An only child herself, she treasured her own five children, delighting in each one.

Following her parents’ divorce, Nancy moved with her mother to Mount Vernon in 1938, where Donna had been offered a job as Society Editor for the Mount Vernon Daily Herald. Donna later became the newspaper’s first woman editor.

Nancy graduated from Mount Vernon High School in 1945, in a class of 103, who had bonded closely, sharing the trials of wartime curfew, rationing of food, gas, and shoes. They shared in wartime civilian activities such as collecting huge piles of metal to be used in the war effort. The class has met regularly for reunions, celebrating their 74th gathering in 2019, and their 76th in 2021.

Following graduation, Nancy enrolled at Washington State College (now University) where she was a communications major, a member of Kappa Alpha Theta, and worked part time in the College News Bureau. In her Senior year, she edited the college yearbook, the CHINOOK.

In 1950 she married Marshall Paris, a fellow WSC graduate, managing their insurance business in Bothell when he was recalled into the Army during the Korean Conflict. In the next several years, the couple welcomed their five children into the family, feeling very blessed. In 1967 she organized and took the whole family on a three week trip to Europe, tracing some family history, meeting French cousins, introducing the children (ages 13 down to six) to beautiful historical locations, and exciting adventures.

Always a writer, Nancy wrote a column for the local library about new books, and an article each month for the Olympia Churchman, the newspaper for the Episcopal Diocese of Olympia. A letter she wrote to the Seattle Times inquiring how she might learn more about Seattle’s almost forgotten underground in Pioneer Square brought more than 300 calls and letters in the next several days to Bill Speidel, author and entrepreneur, Unofficial ‘mayor’ of Pioneer Square. He told Nancy that he just ‘had to have the area cleared and start the tour.’ Considerable work had to be done to clear the area of debris and make it safe for visitors. He credited Nancy with starting the ball rolling in what proved to be the second most popular attraction in Seattle for locals and tourists alike.

A letter Nancy wrote to KODAK became the basis of a new ad campaign, urging mothers to take more pictures of their children. At the time it was expected that when dad got home from work, he would take the pictures, missing some of the funny, candid shots during the day, Nancy suggested. It was a time when roles were beginning to change; KODAK’s ads began reflecting that change, and the couple’s children even got to star in some of the photo shoot!

When her children were all in school, Nancy became more active in the community, working to establish the Historical Museum, and beginning her idea to establish a park with the museum and historic buildings alongside the river at Bothell Landing. She also received a state award from then Governor Dan Evans for the work leading the Bothell Beautification group, whose efforts included tree planting in the renovation of the historic town cemetery.

The family moved to south Whidbey in 1970 to Useless Bay.

Later, when it became necessary for her to resume working outside the home, she was offered a job with Women’s Studies at the University, which then became a series of contracts promoting UW’s Continuing Education classes, using print, radio as well as flyers and brochures to spread the word.

Still later when she was seeking a job on the island, she became assistant to the director of Extended Services, which became Senior Services of Island County.

Always eager for new learning experiences, she took a 24 hour weekend class in log home building which encompassed all the necessary steps from debarking the cut logs to applying the sealant between those same logs and the finishing details. With friends and family she helped build a three- story milled log home in Clinton, comparing much of the work to lessons she had learned in sewing and craft classes, ‘measure twice, cut once’. At age 50, tired of thinking of herself as non-athletic, Nancy signed up for swimming, skiing and ice skating lessons, all activities she had not experienced before.

After moving to Coupeville in 1998, Nancy was employed as Office Manager for Salmonberry Studio in Ledgewood, using her organizational and creative skills to help a local artist reach a much greater market. She also worked over many years to produce her own family history, filling two full volumes of stories from England, Scotland, and Ireland, to Canada and America.
Corresponding with friends, family, and friends of her children across the world, Nancy’s legacy of encouragement, support, and love is boundless.

In lieu of flowers, Nancy requested that friends give a book to a child, write a letter to an old friend, or make a gift to St. Augustine’s Episcopal Church, Freeland, for Community Outreach.