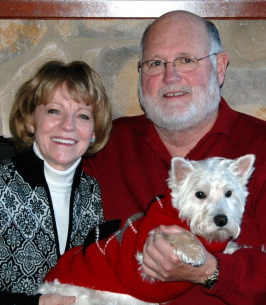 Joann Thornton was born in Mauston, WI to Madeleine and Buford Boyd. She grew up in Wisconsin attending Mauston High School in 1965. After graduating she married Arlan Ruf in Eau Claire WI, and together they raised two sons, Keven and Marty.

Joann was a devoted, engaged mother, and took great care to establish educational and behavioral expectations for the boys. They did not always comply, but she never relented. In their adulthood they finally realized the great support and encouragement they received from her.

Following employment opportunities across the country, the family lived in Wisconsin, Washington State, Pennsylvania, then back to Wisconsin and finally Washington again. Joann worked at Boeing in Everett, WA for over 20 years, serving top executives as Administrative Assistant. Widely recognized for her work ethic, customer service and devotion, she was respected and admired. Anyone who called her recognized she had the most gracious and professional demeanor, and anyone who received a written correspondence noted her fine handwriting.

Priscilla Crutcher, one of her lifelong friends from her years at Boeing, said Joann’s professionalism was unparalleled and was truly the one who made sure things got done.

Before retiring from Boeing, and after divorce, Joann was introduced by Priscilla to Dennis Thornton. Joann and Dennis began a five year courtship that resulted in a 2005 wedding at the Canlis Restaurant in Seattle. The pair immediately began traveling the world on their honeymoon to Bora Bora, and later to Europe and other places in the South Pacific. She said in her last moments that she most enjoyed Tahiti, but all her travels with Dennis were highlights of her life.

Joann and Dennis also enjoyed cruising the Puget Sound and Canadian Pacific waters in the Tonic, Dennis’ cabin cruiser. They were long time members of the Seattle Yacht Club and were welcomed to out-stations from Seattle to Alaska. Every summer had them taking weeks on the water, enjoying scenery of glaciers, whales, eagles and the wilds of the Pacific Northwest. Joann’s devoted canine companion, McDuff, accompanied her on long plane rides and on every boating adventure. McDuff was very protective of Joann and sternly warned anyone against encroaching too closely.

Joann achieved her goal of a pleasant, comfortable retirement with a companion who shared her interests. She enjoyed socializing on boating trips, and enjoyed adventures and travel. She enjoyed robust health for many years, outlasting everyone on her vigorous walks. Unfortunately a cruel and relentless illness took her strength in the end. She struggled against PSP (Progressive Supranuclear Palsy), which eventually took her ability to communicate and function independently. Her steep decline was lamented by her family, and Dennis provided devoted and selfless care for her right up to the very end. Also providing supportive assistance were Hospice and other local care agencies.

Joann passed away with her loved ones present in the comfort of her home in Anacortes, WA. She was able to say good by to her grandchildren Owen and Henry Ruf, and to her sons and their spouses, as well as to Dennis’ children and their partners.

Joann left the world as she lived it: in control, with firm will, bravely. Her life and death are lessons in determination and she led a self-actualized life: she set goals, made plans and achieved objectives. These were the values she imparted to her family, and her strength of will was admirable.